Today, a new release of the popular free & open source operating system Ubuntu becomes available. This is release 9.10, code-named Karmic Koala. In the interest of full disclosure, I should mention that I could be a little biased, as I had a hand in the planning and development of the release.

First, if you don’t know much about Ubuntu, I should point out that the Ubuntu family of Linux distros is actually pretty big. It includes Ubuntu, Kubuntu, Xubuntu, Edubuntu, Mythbuntu, Ubuntu Studio, and Ubuntu Netbook Remix. And guess what? It’s grown again! There is now Kubuntu Netbook Edition, featuring the new KDE Plasma Netbook interface! I was playing with it for a while on my roommate’s HP Mini. Very nice! Have a look: 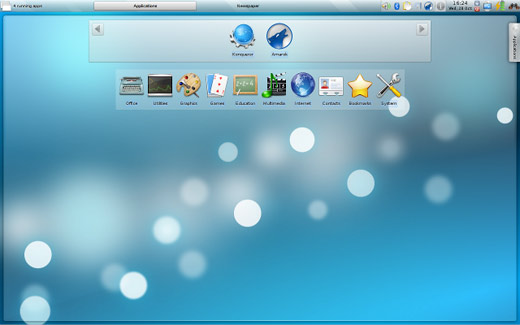 Welcome to your new OS

One of the new features of the installer, Ubiquity, is a slideshow to introduce new users to their chosen desktop environment and the default applicaitons while they wait for the install to complete. Part of that installation includes some hot new features at the system level: GRUB2, KMS, and Ext4. Since this is a geek blog, that means I can use acronyms, right?

One goal of this release was “social from the start.” Originally this was going to mean including the Gwibber microblogging client in Ubuntu, but the new version was not ready in time. It is still available in the repositories. Kubuntu, however, includes the µblog Plasma widget for Twitter and Identi.ca. For a more feature-filled client on KDE/Kubuntu, I recommend Choqok. On the social topic, Kubuntu also includes a Facebook Plasma widget and Facebook chat plugin for Kopete.

Ubuntu has switched from shipping a combination of Pidgin and Ekiga to the Telepathy-based Empathy client. Empathy integrates the IM protocols pidgin supported with video and voice chat capabilities. I used it to video chat with Ubuntu Developer William Grant a few days ago. But how’s this an improvement over having those two separate applications before? Well, as Jono Bacon showed on his blog, aside from simple chat, it can also enable you to share your desktop with whomever you are chatting with. Neat!

How many computers do you have? I’ll wait while you go count. Done yet? Right, so anyway… how do you like trying to keep them synced? Bit of a pain, isn’t it? Ubuntu Karmic now includes Ubuntu One integration so you can sync your data – including things like any notes you take in Tomboy – between all your computers, or to share with your friends. You get 2GB of storage automatically.

There’s also a whole new way to install software now! The Ubuntu Software Center is a new interface for managing the software you have installed and replacing good old Applications -> Add/Remove. It’s got a new interface that should make finding what you want easier. As you can see from the linked page’s roadmap section, in the future, it will function a bit like the app stores you’re familiar with from iPhones and Android phones, allowing you to buy some of the video games available for Linux directly. I just hope it also provides an easy way to donate to some of our favorite FOSS projects.

The long-awaited new theme has come to Ubuntu! Check out the screenshot below: 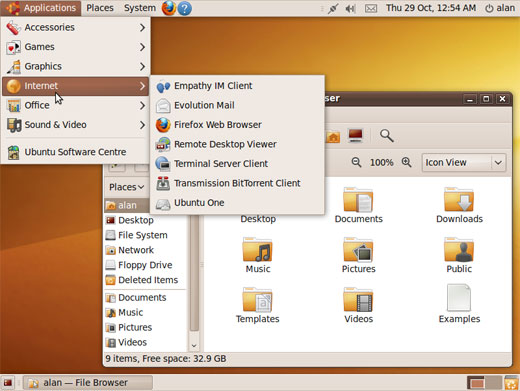 With the new GNOME 2.28, there are plenty of nice incremental improvements. For you netbook users, the webcam program Cheese has been improved to fit better on your small screens. And for those with regular laptops, the new power manager will spin down your disk for lower power usage. The Movie Player finally has support for DVD menus, so there is no more need to install VLC. There’s also some new hotness with the sound capabilities. Got a subwoofer? Want to change the balance on your speakers? Now you can! There was a new project called “One Hundred Papercuts,” related to the phrase “death by 100 papercuts.” The goal was to fix 100 papercuts, or small usability issues that just get in users’ way or make it slightly harder to work with the system. It was a way to provide extra polish. For example, making it easier to find Clipart in OpenOffice and removing cases of “geek speak” from the interface – because really, if you give a beginner a laptop that refers to its network card as “eth0” instead of “the network card,” they’re going to get confused and believe all that junk about Linux being for nerds. Icons that don’t make sense were replaced with better ones, and overall things are a bit nicer to use.

Regular Kubuntu has been updated to include KDE 4.3.2 which brings some new polish to the desktop. The new feature I’ve used most is the ability to delve into folders from the desktop folder view Plasma widget without having to open any new windows. Oh, and yes, the included version of Amarok can play CDs, unlike last release.  For the first time, I really like Amarok! There’s also an option in the menu by default to install the most popular web browser on Linux, Firefox.  As someone who spent a while switching between Ubuntu’s GNOME and Kubuntu’s KDE interfaces and never settled on all applications from one desktop, I really appreciate the new integration for their notification daemons. In the past, both KNotify and Notification Daemon or Notify-OSD would run regardless of whether you logged into GNOME or KDE, and then KDE applications would have KNotify popups and GNOME ones would have Notification Daemon or Notif-OSD popups, making for an inconsistent interface. KNotify now speaks the same language as the other two, so the interface is more consistent and polished. Kubuntu now also has a Message Indicator Applet just like Ubuntu, so if you choose Notify-OSD as your notification system, messages requiring a response (such as a highlight in a chatroom or IRC channel) are stored for later. 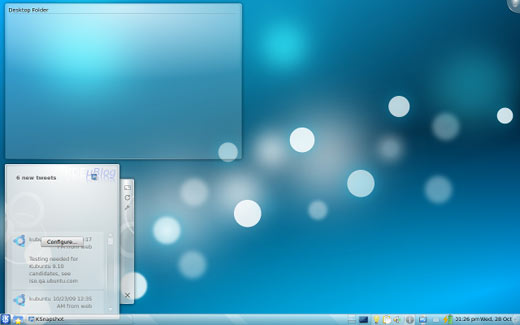 I’ve been running this release since alpha 1 back in May. I can with full confidence say it completely rocks! If you were turned off by some of the more interesting bugs in the last few releases, give this one a try. It’s both more polished and more stable. I’m ditching the “only use Long Term Support releases” rule on my family’s computers for this one. This is without a doubt the best Ubuntu release I’ve seen.

Please note that Geeks are Sexy might get a small commission if you buy something through our posts.